Upon release No Man’s Sky was critically panned by consumers and reviewers for a barebones amount of content that was nothing compared what was initially promised in the marketing storm running up to the games release. Following the release, many people gave up on the company (Hello Games) and slowly but surely, the game was all but forgotten amidst new releases.

Two years later Sean Murray and his team put No Man’s Sky back on the galaxy map with the release of the Next update, rehauling a lot of the game they built upon and adding a full multiplayer feature, so you and your friends can create your own Guide to the Galaxy (yay!).

I’m now going to go through some of my experiences with the game as well as give my opinion on the update however, if you wish to know every minute detail then this is the link to the patch notes: (https://www.nomanssky.com/next-update/) 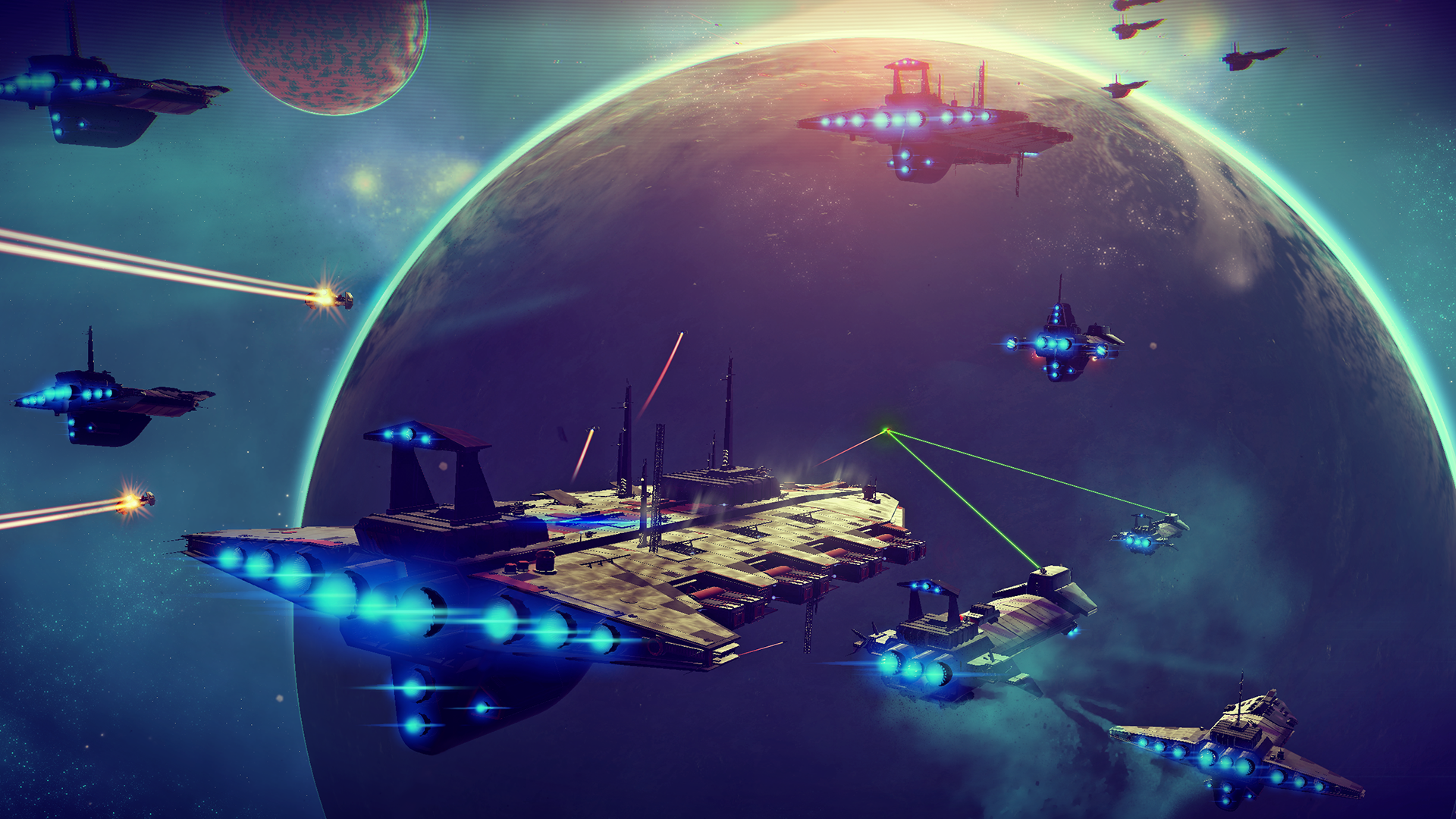 To preface this, I played this on a PS4 and hadn’t played the game since it originally came out so coming back to it felt like playing a brand-new game. This was the first positive as the original game really felt unfinished in nearly every regard. From the get go the ‘tutorial’ was rehauled and teaches the player a lot of the newer mechanics such as refining elements and new materials that allow you to take advantage of the redesigned crafting system.

Very quickly the game lets you know there is a new hierarchical system in place all around the newer materials and their roles. An example of this would be being initially told to collect ferrite dust to create metal plating that in turn helps create launcher fuel for your ship. Now this ferrite dust is also used to charge your terrain modifier however you can refine the dust to produce enhanced versions of the material (ferrite dust into pure ferrite) which can then charge your terrain modifier even quicker.

I started the new game with a friend and we both had the misfortune of spawning in a toxic planet which cut our available time outside of our ships drastically. This meant our actual exploration of the planet was tethered to a couple minutes away from our ships however, I didn’t mind this as it was our humble beginnings as planet hopping explorers, we all need to start somewhere after all right?

After repairing our suits and ships we left the planet onto greener pastures! When I say greener pastures, I mean a planet that was entirely a desert and on fire with superheated rainstorms half the time. It was here that we decided to create our base, why? I honestly couldn’t tell you.

We were introduced to the base building mechanics on this planet and immediately it was clear how awkward it was to create something in the third person perspective, it was much easier to do in first person. The way you unlock new base parts is through using your fancy new analysis visor to search planet surfaces for a ‘salvage module’ that acts as a form of currency. Inputting these salvage modules into a blueprint analyser (something you are also told to build) allows you to then obtain the base parts through spending salvage modules. Initially I was confused by this because when looking at the blueprint menu you can’t scroll through and pick what building blueprints you wanted. Now, unless this is a bug it means that you are going to need to grind for salvage modules to get to the important things like teleporters. 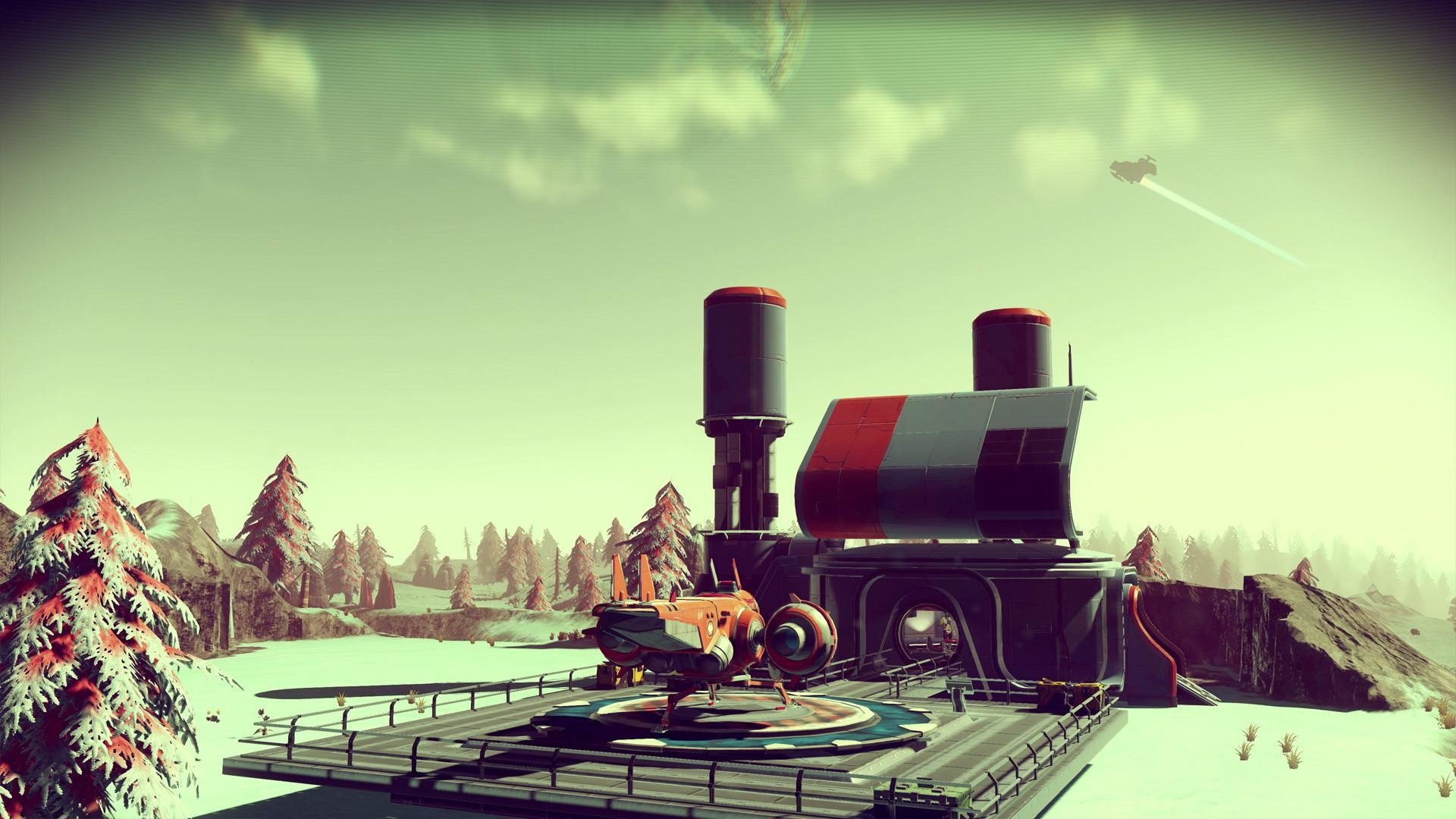 Anyway, after building our little box that we call a home (a lot worse than the above image) my friend and I split off and went to different planets, he was more of an explorer and I was more of a merchant in our game, this suited us well as he could just go to a planet and tell if there is good resources without me having to do trial and error. Nearly every planet we went to was riddled with storms and after a while, the storms that initially had me worried if I would die and lose my inventory just turned into me sighing and walking back to my ship where I would remain for a couple minutes just wasting time till it cleared.

After mining away a load of copper minerals and picking up some subterranean relics (a useful form of early game currency), filling my backpack and ship storage I took flight to my nearest space station where I saw an area that looked much more alive than I had expected. There were multiple new vendors I had never seen before and a new guild system that allowed you to do guild specific quests to earn different rewards. However, as someone that loves putting backstories into my characters seeing a customisation station filled my heart with glee. It’s surprisingly in depth with every race being available each with their own styles representing them.

The new economy of the game is a ‘rich get richer’ model which is fine for this kind of game as the only initial issue is becoming rich and the rest is set in motion as long as you follow a formula of doing quests, setting up a farm and completing freighter missions.

Speaking of freighters, they can be bought or given to you after the captain you just saved from certain death realises this is too stressful for them to deal with. With this you can also build and customise the interior and recruit a fleet of ships to become a new space faring adventurer with your motley crew following your every move. My issue with the freighters is that getting a fleet of ships is a huge money sink which requires a lot of grinding and then the missions you can send your fleet on is little more than waiting an allotted time for them to return with some cash and materials that you can use. Similar to how Assassins Creed: Black Flag handles their ship fleet missions.

The graphical engine has also been completely overhauled and it shows, the game is a joy to look at. The use of high contrast colours on each new planet make them all memorable and beautiful in their own gorgeously dangerous way.

I touched on this briefly when talking about finding salvage modules, but the analysis visor has also been enhanced to provide a heap of new information relating to your position on the world and its climate, weather and available resources.

Overall, the update is exactly what the game needed, an overhaul of everything the original version of the game was and adding all of the features originally promised plus more. This game is now a genuinely competent space exploration, survival/crafting game with a solid (new) foundation that can be further built upon to lengthen its lifespan for another couple years to come.

I can wholeheartedly understand why people now enjoy this game however, I can’t get on with it. It’s nothing to do with the new update its more how the game functions at a base level.

There is just SO much waiting, I feel as though I’m barely even playing the game. Okay let me explain because it took a while for me to even realise this as well. For example, mining. It’s the most fundamental part of the entire game. What the rest of the game is built upon and all I’m doing is holding R2 till I overheat, waiting for it to recharge and then holding R2 again till I either have to recharge my mining laser, or the thing I’m mining explodes into minerals.

There’re more examples of this and I’m just going to list them out because it ruins my enjoyment of this otherwise fun experience:

Waiting for the refiner to finish creating your new materials

Waiting for freighter missions to come back

Waiting for the analysis visor to scan anything

Waiting to travel from one long distance location to another

Along with these issues there are also quite a few bugs I’ve come across, the worst being that whenever I fired my ships weapons I took damage (this is a known bug) and taking damage every time I climbed to the top of a ladder (I don’t know either). Expect frame rate drops frequently on the PS4 and both me and my friend had multiple crashes during our time together which caused the loss of progress.

These may seem extremely nit-pickey however, this built up for me and in the end, it was unbearable. These are all easy fixes as well and if they get changed catch me back exploring the universe but with how the game is now, personally, unless you enjoy the grind or have an enjoyment for survival crafting/exploration games then I wouldn’t recommend the No Man’s Sky Next update.